The hollow Earth idea holds that Earth is not a solid sphere but is hollow and has openings at the poles. Furthermore, an advanced civilization, the Agartha, exists within Earth. Their people include advanced spiritual and technological masters who sometimes foray into the atmosphere in their UFOs.

Each hole at the poles are circumference of 1400 miles wide. At the center of the earth is not a molten core but an inner sun which is six hundred miles wide and is 2900 miles from the Inner Surfaces. The diameter of the lip at the opening at the poles is 1200 miles long, thus a person can not see the other side of the opening.

Therefore, there exists three worlds on our planet, the outer surface, where we live, the middle earth which purportedly is lined with many caverns, tunnels (made by someone), Inner Cities and people who live there and lastly the Inner Surface. How Gravity works then is the following. For the people who live on the outer surface, Gravity holds them down. For the people that live in the middle earth, the closer they get to the center of the crust (i.e. - 400 miles down), the less effect gravity will have upon them. 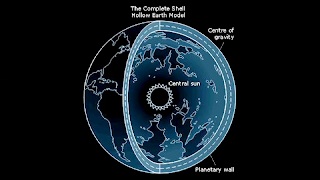 
Both Earth and Moon ring hollow for hours after struck with meteorites, as measured by seismic stations on Earth and on the Moon

Earthquakes do not occur deeper than 450 miles, but down there, the supposedly molten magma would not create and release friction via earthquakes - a viscous or molten mass equalizes tension, it does not accumulate tension because it is flexible

Gravity experiments in mine shafts show that the balls pointing to the center of gravity point away from the center of the Earth, instead of towards it, as measured by the distance at the top and bottom of two lead balls hanging from very long wires into a mine shaft.

The temperature, as one gets past a certain latitude, increases as one approaches the poles, which is not supposed to happen; arctic (and in less cases, antarctic) explorers have reported in their ship's logs to have taken off their climate gear (this was before Goretex)

Floating flora and fauna near the northern polar region's ocean: seeds, flowers and trees are found at latitudes where none should be, and they are often very fresh, not decomposed from many months of floating in the ocean currents that might have brought them from far away

Spiders, bees, mosquitos, moths and flies were found once past the cold and icy region below the north pole; northern Greenland is the mosquito capital of the world

The origin of icebergs: around the north pole, they are made of frozen sweetwater - not frozen saltwater. There is little if any precipitation of rain or snow (sweetwater) in the polar regions. Saltwater freezes to sea ice at low enough temperatures. There is no supply of sweetwater to explain the existence of icebergs which are hundreds of feet high, up to hundreds of miles long and dozens of miles wide

Icebergs around the north pole are colored by red pollen of an unknown plant, as well as dust - a lot of it; including earth material on top of them

Massive wave-like or tidal movements in the arctic polar region have been witnessed by many explorers, waves which cracked and moved the ice floes around the explorer's ships in a very, very major way that had their hair stand on end

Floating and deposited driftwood (including exotic species) is extremely abundant and sometimes stacked 15 feet/5m high along the coasts in the polar region of Spitzbergen and Greenland, up to 86 degrees latitude north

Mammoth, elephant, woolly rhinoceros, hippopotamus, lion and hyena have been found in the ice from the north pole that is also deposited on the coasts of Siberia; entire forests of mammoth ivory have been found there

Approaching the magnetic pole, the compass needle points down towards the dial - and passing the "horizon", where the surface or Earth curves inward at the poles, like an apple into its center, only much more pronounced - the compass needle starts pointing up, behaving now like a vertical and not a horizontal instrument

The magnetic north pole is not a specific point, it is a large area around the geographic north or south poles, which do not exist as solid points on a surface, they are points in empty space; magnetic and geographic poles have a different axis, as you know; the compass stops working in a horizontal plane, and actually indicates the location of a magnetic "pole" over a vast area. You can circle the area around the geographic pole and always get a "north" readingwith the compass. In short, there is no specific point, but an area where magnetic "north" or "south" is shown with a compass

Standard planetary formation theories: how were they formed, what made them spin, and still does.

Gaseous planetary bodies like the sun and the large planets of our solar system can not generate a magnetic field; but they all have one

A spinning planetary body in formation has zero gravity in its center, so mass does accumulate where gravitational and centrifugal forces are balanced within the area of the spinning matter, and that form would be a sphere with openings at the top and bottom, like a hurricane of matter in space - not as a solid body with a solid center (the center has zero gravity)

If planets were formed from cosmic dust which started to condense into a body like Earth, then the angular momentum would still continue to increase, which it doesn't - the earth's spin is steady, not slowing down or speeding up

Larger planets with more mass should spin more slowly than smaller planets with less mass - but they don't: the largest, Jupiter, spins a lot faster (once every 10 hours) than Mercury, which is just a tiny fraction the size of Jupiter and needs 58 Earth days for one spin around its axis

Links
Now, instead of writing alot of this stuff that already are out on the internet I will provide links to other sides Ive found.

http://humansarefree.com/2011/05/hollow-earth-agartha-complete.html
This user got an amazing colection about hollow earth and topics around it. Also a very inmportant testimony from Billie Faye Woodard that workt inside area 51.

Sharellion
In this blog, I will write and show what I believe in. If you dont believe in this stuff, thats just fine ^^ I love you all, whoever you are and what ever you believe in... Namaste